The Voice of the Viola Times of Oppression 2 Valdimarsdottir & Worms

The Voice of the Viola in Times of Oppression Valdimarsdottir & Worms

Critic's choice in Opera News for Woman The making of

Something we didn’t know yet: Vivaldi’s four seasons on accordion. The four concerts have already been executed by violins and besides that also with a recorder, flute or guitar starring as a soloist. An adaption of the music for a solo accordion however, did not exist so far. Until now, because the Bosnian-Dutch accordion virtuous Nihad Hrustanbegovic adapted the music in such a way that the accordion becomes both the soloist and the orchestra.

Not only is Antonio Vivaldi (1678-1741) one of the most well-known composers from the baroque period, he was also one of the most productive composers. He composed over 450 solo-concerts, for the widest range of musical instruments. These include music for guitar, mandolin, piccolo, flute, trumpet, shawm, horn and oboe. For the cello he composed 20 concerts and for the bassoon over 38. But these numbers are nothing compared to the 220 violin concerts with which he enriched the musical life. Of all these works, the four concerts that form The four seasons, are a world-wide hit.

Many of his concerts for one or more solo-instruments, Vivaldi wrote for the home orchestra of the Ospedale della Pietà, a shelter for orphan girls,  in his place of birth Vienna. Shortly after he was ordained (1703) he got the post of violin teacher at the music education of the orphanage. Not much later he got appointed as director. With some intervals he stayed connected to the institution until 1740. His girls-orchestra became famous in and beyond Italy. As musicologist Theo Willemze sometime noted: ‘ Vivaldi was one of the most honoured and celebrated violinists and composers of his era’.

What makes The four seasons extra popular for a broad audience, is the programme that Vivaldi added to the music. He included  for each score of the four concerts an assumedly self-written poem (in sonnet form).

In these he translated the characteristics elements of the four seasons, which more or less  form the tone of the concerts. His expectation was that the concerts would do well commercially. Instantly he delivered an early example of what would later be called ‘programme music’; music that is based on an idea or story and that became very popular in the 19th century.

In the music of Spring we discover birdsong, interrupted by thunderstorm, the slow part voices the resting country man and in the final you will hear a cheerful dance to honour the spring. In Summer, the music symbolizes the sluggishness from the heat which erupts into a sudden heavy weather. Autumn starts with an elated being together, the (wine) harvest is done, cheerfulness and  drunkenness galore, a hangover is slept off and in the end there’s a hunting party. Snow and an icy wind mark the first part of Winter, after that the comfort of being inside while the rain is clattering on the windows, followed in the third part by  people shuffling and stumbling over crackling ice. For those who do not believe in the programme; without it The four seasons is still absolutely enjoyable music. 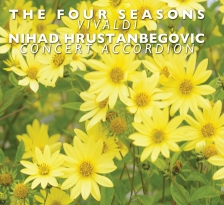 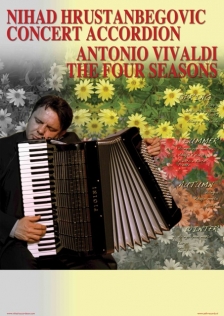