The Art Of Fugue Geoffrey Madge

The Voice of the Viola 2 Valdimarsdottir & Worms

The Voice of the Viola Valdimarsdottir & Worms 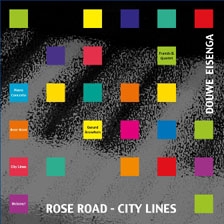 The Dutch composer Douwe Eisenga writes post-minimal music that is accessible without becoming superficial. Better evidence of this than the CD Rose Road - City Lines, is scarcely conceivable. Time and again he creates a modern, irresistible groove with classical instruments. This emerges strongly in the impressive Piano Concerto, the mesmerizing City Lines and the sparkling string quartet Rose Road. Colorful and sublime.

Listen to a live recording (not the cd-recording!) in Grote Kerk Veere made by Omroep Zeeland june 2005.

PZC The Dutch composer Douwe Eisenga writes post-minimal music that is accessible without becoming superficial. Better evidence of this than the CD Rose Road—City Lines, is scarcely conceivable. Time and again he creates a modern, irresistible groove with classical instruments. This emerges strongly in the impressive Piano Concerto, the mesmerizing City Lines and the sparkling string quartet Rose Road. Rolf Bosboom


TROUW The Xenakis Ensemble performed Eisenga's Piano Concerto in Japan, but in his own country his name has not been universally recognized. That will change with the CD "Rose Roads – City Lines." Eisenga has found his own sound within the restricted latitude of minimalism. Perhaps "City Lines" is most reminiscent of the sensual composer Simeon ten Holt. The performance of Eisenga's tenderly sweet melodiousness by the Francis B. Quartet and pianist Gerard Bouwhuis is colorful and sublime. Anthony Fiumara


NRC The minimalistic Piano Concerto, with pianist Gerard Bouwhuis as nonchalant pioneer, takes on showy proportions now and then through the use of heroic brass players. The string quartet Rose Road, with somber counterpoint and sharp counterrhythms, is splendidly played by the Francis B. Quartet. City Lines babbles on in extreme respectability. Jochem Valkenburg


VOLKSKRANT  (four out of five stars)
The DNA of Eisenga's work bears a likeness to the pepped-up locomotion of Aaron Copland and the benign minimalia of the Flemish composer Wim Mertens. Philip Glass is also family, but Eisenga's Pianoconcert, with its tumbling notes and wheedling clarinets, has a playful inventivity usually lacking in Glass' fill-in-the-blanks exercises. Frits van der Waa

VIVACE - music that combines the best


BS MAGAZINE Recently one could buy a beautiful cd-box with work of Simeon ten Holt. An affordable edition which made immediately curious about the state of affairs in the Dutch minimal music. Considerably younger than Ten Holt is Douwe Eisenga (1961) and perhaps that’s why he knows how to bridge the gap between pop music and minimal music. This kind of music may in the hands of lesser gods sometimes stuck in repetition, but the Eisenga pieces are inventive with whipping brass parts and oriental motifs. The performance on the CD is very good with pianist Gerard Bouwhuis and Francis B. Quartet at the helm. The Piano Concerto takes up most of the disc, however the on four pianos performed City Lines is perhaps the finest piece. Based on an ancient folk tune Bouwhuis lifts Eisenga's composition to the 21st century level. So this is music that deserves more attention. Minimal Music for the Millions? Erik Verzijl


DE STENTOR Eisenga is a typical cross-over figure: elements of minimal music, pop and jazz compete for the front rank in his style, in which the development of rhythmic pulses is especially notable. Another characteristic is a great degree of virtuosity, for example in the Piano Concerto. The most appealing to me—at least as far as musical/spiritual content—is Rose Road, Eisenga's first string quartet, in an intense rendition by the Francis B. Quartet. The slow and somewhat somberly tinted fugue which begins the piece clearly breathes the mood of Copland's ballet Appalachian Spring, forming a colorful contrast to the sparkling continuation of this opus. City lines for four pianos is an intriguing mix of Simeon ten Holt's Canto ostinato and the "maximal" minimal style of John Adams. Maarten Brandt


BN DE STEM Eisenga is one of the composers who treat us sounds that are enjoyable to listen to and which are nevertheless new and come across as such. Most impressive is his Piano Concerto with subtly shifting colors. The pianist, the excellent playing Gerard Bouwhuis, uses few keys for a steady beat. An extensive ensemble follows. The piece is dynamic in a modest way. Who is waiting for great things, waits in vain. But those who are dobbing along, will discover a world of nuance. Tom Meeuwis


ZEEUWS TIJDSCHRIFT One of the strongest elements I encountered on this CD is the ability of Eisenga to subtly vary rhythmic impulses. This quality is evident in the piano concerto as well as in City Lines and the string quartet, often combined with harmonic shifts which keep the listener curious as to the sequel. That comes—in my opinion—also because Eisenga in his work has a sense of moderation as regards length and his subtleties don’t reach into infinity like Morton Feldman’s. The string quartet’s serene introduction and the pensive undertones in City Lines I found quite beautiful. Kees Cijsouw


Despite the simplicity of resources there is enough to experience in Eisenga's music and the performance is excellent. (four out of five stars) Paul Herruer